Love & Hip Hop New York star K. Michelle is never one to back down from an argument.

As a matter of fact, the Rebellious Soul singer will take the beef to social media websites. Just ask Tamar Braxton and Rasheeda. Now you can add Fabolous’ assistant Ashley Weatherspoon to the list.

After the alleged phone conversation, K. Michelle went on Twitter and posted the message, “Don’t call me confronting me about your man if you don’t have a job. U should be calling Manpower, fire crotch!” 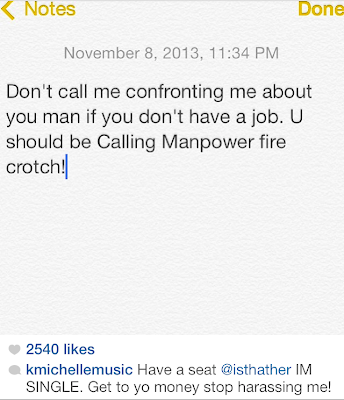 K. Michelle made sure she tagged Ashley in the message (@isthather). She even posted Ashley’s phone number, encouraging her followers to call her (T(hat)H(oe)O(ver)T(here). Watch K. Michelle explain her beef with Ashley below.