Love & Hip Hop Atlanta star K. Michelle announced on the season finale that she was moving to New York to focus on her music career.

The VSOP singer must have been so excited by the move that she allegedly failed to pay her last two months rent before leaving the ATL. Her former landlord filed papers in Fulton County magistrate court that the reality star owes $6,450 (plus late fees), plus an additional $1,250 in filing and administrative fees, Access Atlanta reports.

The filings revealed that she had not paid June or July rent. Her monthly rent was $2,400.

“I was trying to accommodate her,” Broker Jason Lapene told Access Atlanta. “But she just disappeared and didn’t give me the keys. I don’t even know what the deal is. She didn’t tell me she was leaving and made it difficult for me to sell the unit. She made it miserable for me.”

K. Michelle claims she didn’t pay the landlord on purpose. She claims she withheld rent because her shower was not working. She gave an explanation for non-payment on Instagram. 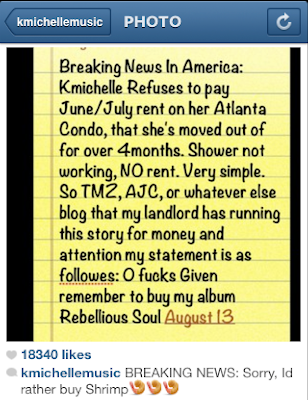 Love & Hip Hop Star K. Michelle Spotted Kissing on a Woman! [Photos]
Hopefully, both parties can come up with a settlement. K. Michelle is scheduled to join the Love & Hip Hop New York cast this season.
Photos via Instagram and Rolling Out