Justin Timberlake and Ryan Gosling are both big stars now.

But back in the days, Timberlake and Gosling were just two kids that appeared on “The Mickey Mouse Club.” The 13-year old boys lived together while on the show during 1993-1994. 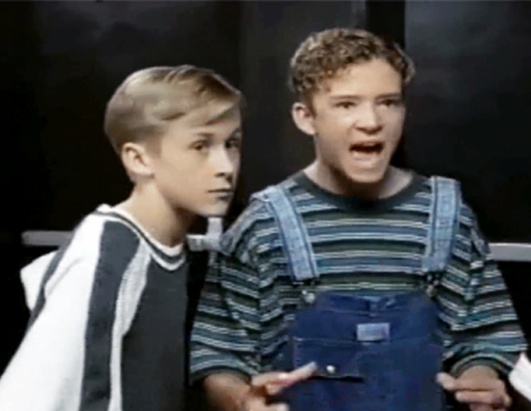 Timberlake shared his experience with Gosling on the Ellen Degeneres Show.

“[Ryan’s] mother had to keep her job in Canada the second year that we  were on the television show, and my mom was his guardian for like six  months,” Timberlake said. “So, we actually lived together when we were that age … We were probably a little closer than the rest of the kids that were on the show because, ya know, we had to share a bathroom.”

Timberlake even revealed that the two stole a golf cart back in the day.

“We used to do terrible things. We thought we were so cool when we were on ‘The Mickey Mouse Club,’” Timberlake explained to DeGeneres. “[One time] we stole a golf cart. And we we’re like ‘Yeah, man. We’re stealing a golf cart,’ but meanwhile, you know what it’s like on a backlot. There’s just golf carts everywhere.”

“So, we stole the golf cart and we drove into MGM Studios, which is totally illegal by the way. And I was like, ‘What you want to do, thug?’ And he [Ryan] was like, ‘I don’t know, cuz,’ because that’s definitely how we talked.”