Michael Jordan’s ex-wife Juanita Jordan has been out of the spot like since their divorce in 2007.

Juanita walked away with a reported $168 million dollar settlement. She’s kept busy by keeping her real estate license active in Chicago and helping her children transition to adult life. She also loves to travel to France, Italy and London.

Juanita recently sat down with the Chicago Business Insider where she discussed life after her high-profile divorce.

Check out a few excerpts from the interview below:

On Juanita’s goals after the divorce:

“I wanted to simplify my life. I got off boards, I downsized the way I lived. I had to because I wasn’t going to be in a huge house. I really looked forward to the basic things: my children and my good friends,”

“I thought I’d open my own business,” she says. “But it was important for me to remain in my kids’ lives as much as possible, even through college. And that required a lot of time.” So she has kept her real estate license active and focused on helping her children settle into adult life.

On Juanita’s current relationship with Michael:

Ms. Jordan says she and Mr. Jordan still talk. “Mostly our conversations are about the children. I don’t remember him saying, ‘By the way, I’m getting married,’ ” she says, chuckling at the thought. “Divorce was certainly new to me. I had to learn that you have to communicate. That it’s not about you or your ex-partner. It’s about making sure the children are all right.”

On Juanita and Michael’s kids:

“They wanted to be like their dad. What boy doesn’t?” Ms. Jordan says. “But they both got to a point where they said, ‘We’re not going to the NBA.’ “ That they were able to walk away from No. 23′s shadow is due much to their mother, who early on pushed her children to establish their own identities.

It’s Jasmine, the youngest Jordan child, who will follow her dad. She is wrapping up her last year at Syracuse University and will join Mr. Jordan in the office of the Charlotte Bobcats, where he’s an owner.

Michael Jordan’s Daughter Jasmine Comes Out of the Closet [Photos] 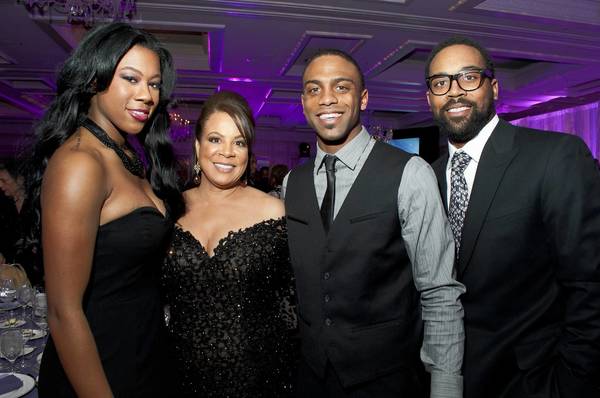 Michael and Juanita eloped and married in Las Vegas in 1989. The couple had no pre-nup but did sign a post-nuptial agreement. They divorced in 2007 after 18 yeas of marriage.

Photos via Chicago Tribune and