Love & Hip Hop Atlanta star Joseline Hernandez shocked her fans when she posted an Instagram photo of what appears to be a baby bump.

“Happy #MilfMoney #baddestputa #puertoricanprincess #lahhatl #LilJoseline,” Hernandez wrote on Monday. The reality star hasn’t said anything else about her supposed pregnancy, but her estranged husband Stevie J went on Twitter to respond to a fan who asked whether the baby was his.

“Time reveals all things,” Stevie wrote, neither denying or confirming whether he got Hernandez pregnant. 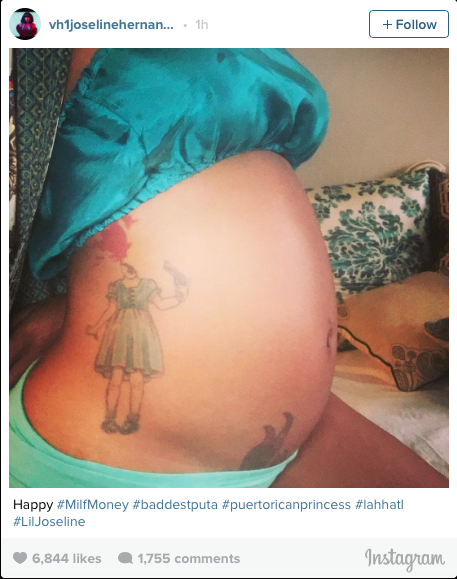 But Stevie didn’t end things there. He also took a shot at Joseline by posting the cover of Michael Jackson’s song, Billie Jean. Jackson sings, “Billie Jean is not my lover. She’s just a girl who thinks that I am the one. But the kid is not my son.” If the baby news is true, it comes on the heels of a feud between the two. Ever since Stevie tweeted in May that he was single, he and Joseline have been firing out shots at each other in interviews and on social media.

Steve admitted in an interview that he was never married to Hernandez. While the Puerto Rican princess claims Stevie is gay. She has posted several tweets which threaten to expose his allege lifestyle.

“Lie detector test about your true liking will be out n—- holla at Jesus for this 1. Why y’all think he gossip so much? He a straight girl,” Joseline tweeted last month. “You ain’t got no car, no money, no house, boy you gotta b stopped. BISH [sic] I think I’m dropping the bomb today f— it.”

This is not the first time Hernandez has threaten to expose Stevie. Nor is this the first time that she’s been pregnant for Stevie. She allegedly got an abortion during the first season of Love & Hip Hop Atlanta.