JET editor-in chief Mitzi Miller let her emotions get the best of her.

American Idol alum Fantasia Barrino didn’t like the photo that JET decided to use for its cover last week. Barrino expressed her disappointment with the photo the magazine chose of her on Instagram.

JET opted to use a 10-year old photo instead of one of the images that she sent of her new look.

Fantasia posted the cover with the words ‘False’ scribbled on the photo, along with her request for the magazine to give her an apology. 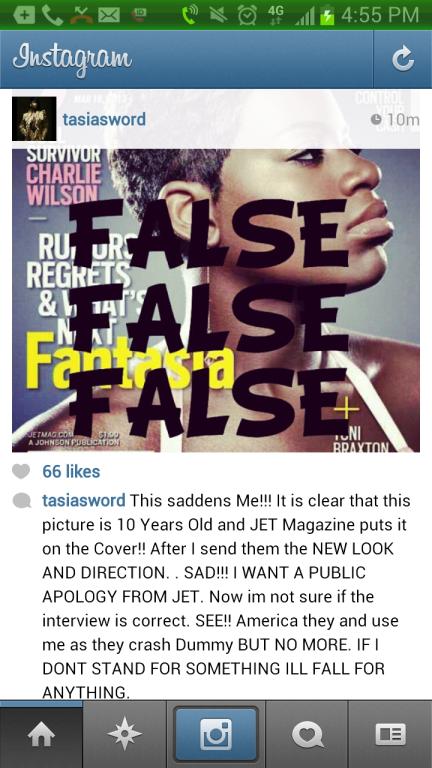 Miller responded to Fantasia’s claims with the statement:

“JET magazine is honored to have Fantasia grace the cover of its March issue.  It is unfortunate that Fantasia is displeased with the cover selection, however JET stands by its decision. As  standard editorial practice, JET consulted with Fantasia’s team, but reserves the right to select the image we deem as most appropriate for JET’s brand and  reflective of the cover story sentiment. JET continues to root for Fantasia’s  success and encourages her fans to pick up the new issue.”

The photos below are the images Fantasia sent to JET.

Meanwhile during the commotion, Miller vented on her personal Facebook page. Although she didn’t mention Barrino by name it was a subliminal diss to the singer.

“The fact that I wasted an hour of my workday writing a press release to address an issue created by a person who cannot even  read it is just… #whyiwannaBahousewife,” Miller wrote.

“I apologize for the lack of sensitivity shown in my Facebook post,” Miller told Madame Noire. “It was a  thoughtless comment made during a moment of frustration. It was unprofessional  and not representative of the JET mission, which is to uplift. I regret  letting my emotions get the best of me. I am truly  apologetic.“