Inspirational Moment: Olympian Oscar Pistorius in One of the Best Photos Ever!

Olympic qualifier Oscar Pistorious of South Africa may not have won a medal in the 400 meters at the London Olympics, but he’s viewed as a winner amongst many around the world.

Pistorious, a double amputee, has inspired a generation with his 400 performance at the Olympics. Not only to other amputees but to “able-bodied” people.

After his semifinal performance on Sunday, an old photo resurfaced on Twitter of Pistorius and Ellie Challs. He’s seen running with the little girl, who is also is a double amputee. It just reminds viewers that what Pistorius did for other amputees and able-bodied people was inspiring. That despite being up against tough obstacles you don’t have to give up or change your goals. 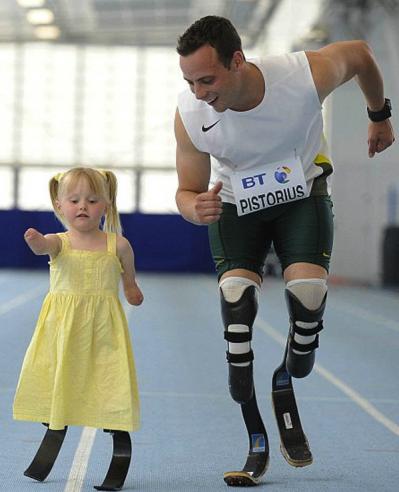 Pistorius, whose nickname is the Blade Runner after his cutting-edge prosthetic sprinting legs, is scheduled to run on the mile relay for South Africa later in the week.