The Fancy rapper went on Instagram and revealed that her inability to trust Young led to their split. The news comes one year after the couple got engaged.

“Unfortunately although I love Nick and have tried to rebuild my trust in him – It’s become apparent in the last few weeks I am unable to,” Azalea wrote on Sunday. “I genuinely wish Nick the best. It’s never easy to part ways with the person you planned you’re [sic] entire future with, but futures can be rewritten and as of today mine is a blank page.” 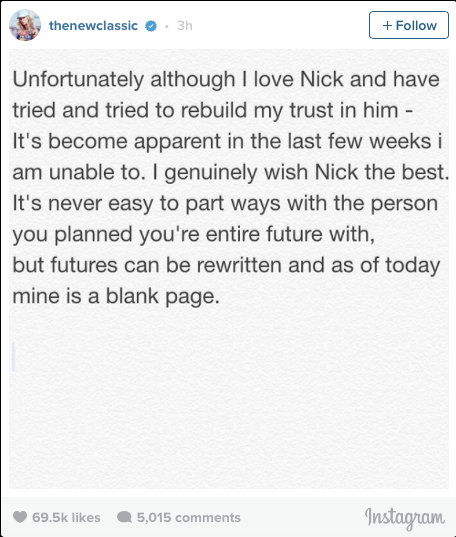 A video surfaced in March that showed Young admitting to cheating on Azalea during a private conversation with Los Angeles Lakers teammate D’Angelo Russell. Young did not know he was being secretly filmed by Russell.

Despite the video, Azalea tried to make it work.

“I got engaged and that’s going good,” she said. “We’re good. There isn’t [controversy] at home. Just on the Internet.”

The former couple had been engaged since June 2015 after he proposed during his 30th birthday party.

Azalea will be able to keep her mind off her trouble love life with the release of her sophomore album Digital Distortion this year. She also recently signed on to be a judge on the Australian edition of The X Factor.