Former NFL player Hank Baskett appears to have cheated on his wife.

According to Radar Online and The National Enquirer, Baskett cheated on Kendra Wilkinson with a transsexual. Wilkinson was eight months pregnant at the time with the couple’s daughter, Alijah.

“Hank first met up with the woman around April 22 in Sherman Oaks, California,”  a source said. “He called her twice before they met in person. He said he’d seen her YouTube videos online, and he couldn’t believe that her photos were real.”

Baskett allegedly used a fake name for their first encounter with Ava London, which took place at her home.

“They mutually masturbated her and he touched her breasts and penis,” the source said about their first encounter. “The entire encounter lasted probably about 15, 20 minutes.”

Baskett allegedly continued a fling with the transsexual and began worrying about the story getting out. There is allegedly footage of a car that resembles Baskett’s leaving her home.

“He promised he would take care of her financially and even left her $2,000 in a coffee cup at her house,” the source told Radar Online/The National Enquirer. “He promised her $5,000 to keep her mouth shut, and even threatened to kill himself if the story got out!” 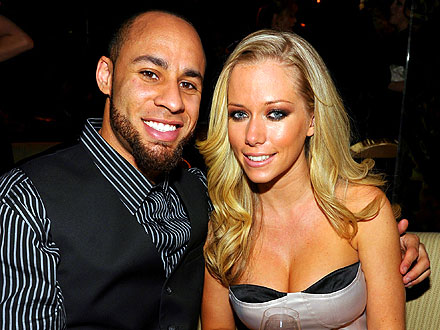 These rumors comes just weeks after Baskett allegedly left the family’s home and checked into a motel. But he is rumored to have moved back into the couple’s Calabasas mansion last weekend.

Hank and Kendra, a former Playboy Playmate, were married in 2009. They have had a reality TV show since 2009.