Gucci Mane is in the middle of promoting his three new mixtapes Molly, Gas and Lean that is scheduled to be released simultaneously.

But the Atlanta rapper still had time to drum up some beef with rappers Young Jeezy, Yo Gotti, T.I. and Waka Flocka Flame. While promoting his projects on Twitter on Tuesday, Gucci decided to have a little fun with his followers. Gucci asked his fans who were their top three p*ssy ass rappers, while he listed his picks.

Gucci Mane Hits Fan Over the Head With a Bottle After He Asks For Autograph! [Details]

But before Gucci revealed his choices he vented about soft rappers. Check out his tweets below.

Then Gucci went for the jugular. He decided to auction off the rights to Waka Flocka Flame, which includes his next three albums and his percentage of Waka’s publishing and touring to whomever can come up with $1 million. 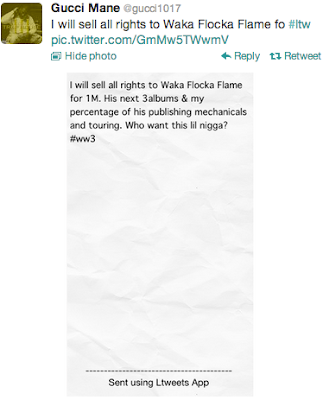 Waka Flocka is currently on tour in Germany but he took a little time away from the stage to address Gucci. Check out Waka’s response below.
Photos via Twitter