The infamous groupie has been detained by U.S. Immigrations and Customs Enforcement since November 2010. And it appears her time behind bars has soften her and she no longer wants to be a villain.

Kat is known for exposing celebrities she allegedly slept with in the past. She gained notoriety in August 2010 when she exposed rapper Soulja Boy’s alleged cocaine use in a hotel room in Atlanta. She recorded the rapper’s hotel room while he was in the shower. In the video, there were alleged lines of cocaine on the dresser. Soujla Boy always denied the rumors.

Now, it appears Soujla Boy was being truthful. Kat admitted on Twitter that it was a set up (we hope her page wasn’t hacked).

Check out her tweets below and read from the bottom up: 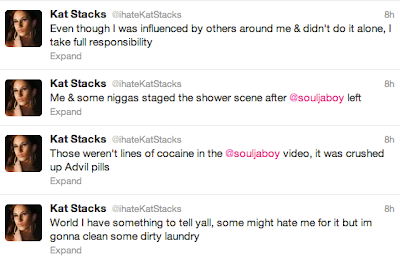 If you missed the video of Kat exposing Soulja boy, watch it below.