Gloria Govan and The Game Rumors Resurface After Photo Shows Her In Bed With His Shirt! [Details]

One of The Game’s Black Wall Street crew posted a photo of Gloria lying in bed wearing one of their sweatshirts on Instagram Monday night. The photo would have been harmless if it didn’t have ties to The Game. Rumors have been circulating for months that Gloria and The Game slept together. It even allegedly caused her baby daddy Matt Barnes to end his relationship with her over it.

Gloria has always denied the fling. But the rumors just won’t go away. Apparently, The Game’s crew doesn’t want them to die down either. A member of The Game’s Black Wall Street by the Twitter name of AvanteRose posted the photo with the caption, “Smash or Pass……Can you guess who’s wearing my money gang hoody???

Needless to say, Barnes was not too happy about the photo. Barnes responded to AvanteRose on Twitter. Read from the bottom up: 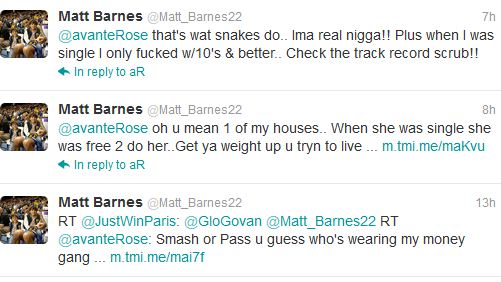 AvanteRose and The Game’s crew may be taking a jab at Barnes after he was recently spotted with Gloria holding hands at Drake’s Grammy afterparty on Feb. 12. Matt and Gloria appeared to be a couple while partying at the Greystone Manor in West Hollywood.

There on again relationship came as a surprise to some in attendance but not to Gloria’s sister Laura Govan. The eldest Govan said on the ‘Basketball Wives LA’ reunion show that the two would get back together.