Ginuwine’s daughter Tiffany Nicole isn’t happy with the way she’s been treated by her father.

Tiffany, a make-up artist, thinks Ginuwine treats his wife’s Sole’s children better than he treats his own. She reached her breaking point earlier in the week and decided to air out their dirty laundry on Twitter.

Tiffany Nicole posted a photo and the caption,”Some wish they had a father But sometimes ur better off cuz I wish I never met mine! #lookalikenothingalike” 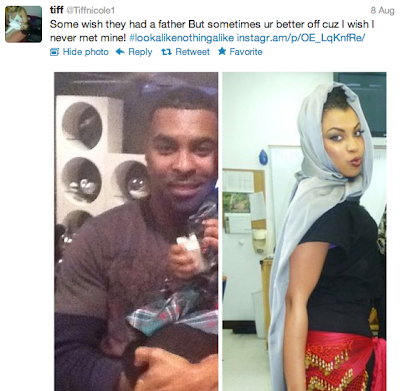 Tiffany Nicole has taken a page from Mike Epps’ 18-year old daughter. The comedian’s offspring put him on blast earlier in the year because money issues.