The future of the Gulf of Mexico’s ecosystem is at stake.

Asian Tiger Prawn from the western pacific has been found in the Gulf and it poses a threat to native species of shrimp and crab. These foot-long crustacean has a large appetite and a proclivity for disease has been spreading along the Gulf since 2006. Tiger prawns are carriers of at least 16 viruses, such as white spot, which can be lethal to shrimp.

These jumbo shrimp, which can grow up to 13 inches long, is threatening prized native species from crabs and oysters to smaller brown and white shrimp. No one knows for certain what the ecological impact will be, but scientists fear a tiger prawn takeover could knock nature’s balance out of whack. An invasion would turn a healthy, diverse marine habitat into one dominated by a single invasive species.

“It has the potential to be real ugly,” Matagorda Bay ecoystem leader for the Texas Parks and Wildlife Department Leslie Hartman told the Houston Chronicle. “But we just do not know.”

Shrimpers pulled one from Texas waters for the first time in June. Three tiger prawns were found in Aransas Bay, Sabine Lake near the Louisiana border and one in Gulf waters about 70 miles from Freeport, according to the Texas Sea Grant program at Texas A&M University.

Some speculate that the prawns reached the Gulf by an accidental release in South Carolina in 1988. Another theory is that the prawns may have escaped from flooded industrial shrimp ponds in the Caribbean Sea during recent hurricanes. 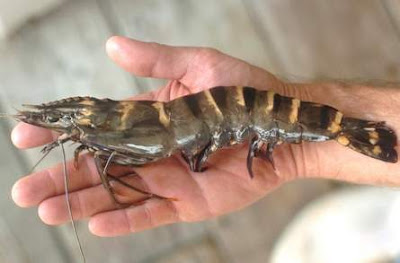 Tiger prawns weigh more than a half-pound and have distinctive black and white stripes on the tail. They eat the same types of food as native shrimp species. They also prey on their smaller cousins, as well as crabs and young oysters.