It appears Future is back with one of his baby mamas.

The Commas rapper’s third baby mama Brittni Mealy has been posting photos of the two, which screams that they are allegedly sleeping together. But Future has been mum about Mealy or having a girlfriend.

Either Future learned from his public romance with fourth baby mama, Ciara, or he’s just not ready to claim Mealy. Regardless, it hasn’t stopped the former Atlanta stripper from claiming him. And this is the same woman who Future impregnated while he was dating his second baby mama India J. 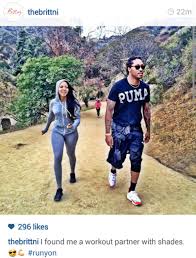 Future didn’t claim Mealy’s baby until she had a DNA test. We’re guessing all is forgiven. But for some of the public, they haven’t forgotten and have been going in on Mealy for taking Future back. Mealy and one of Future’s alleged groupies whose Instagram name is ‘Wet Apple’ exchanged words. Read below:

It appears Mealy doesn’t have a problem with Future sleeping around. This comes on the heels of a groupie in Montreal claiming she slept with Future as well. According to BallerAlert.com, the mystery girl revealed that she reached out to the rapper on Instagram while he was in Montreal.

The groupie screenshot their conversations where she told him, “I’m going to my home to get ready then I’m coming to f*ck you.”

It’s still unclear if he’s in a relationship with Nealy, but it definitely clear he loves the ladies.