Funkmaster Flex still has some unresolved feelings with Drake.

For some odd reason, the Hot 97 DJ decided to take shots at the Hotline Bling rapper during a party. While Flex was spinning at a party in Long Island, he decided to play Meek Mill’s Dreams And Nightmares song and yell into the mic “F*ck that Canadian n****.”

Most assumed he was referring to Drake, although, he didn’t mention his name during the rant. Who knows exactly what spurred him to send a shot at Drake now, months after his beef with Meek ended. 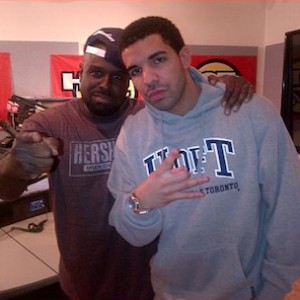 Flex injected himself into the beef by leaking tracks by Quentin Miller, Drake’s ghostwriter, to little reaction by the masses. Flex took Meek’s side in the beef and even played Miller’s 10 Bands reference track, which Drake put on his mixtape “If You’re Reading This It’s Too Late.” Check out Flex’s rant below.

Photos via Runninglip.com and HipHopdx.com