Former New England Patriot star Aaron Hernandez continues to sit behind bars while he waits for his probable cause hearing rescheduled for August 22.

Hernandez has pleaded not guilty to first-degree murder of Boston semi-pro football player Odin Lloyd. He is being held without bail. His lawyers allege the case against him is circumstantial and he wants to clear his name.

But authorities claim Lloyd was killed with a .45-caliber gun in an industrial park in North Attleborough, Mass., not far from Hernandez’s home. He had been shot five times. Authorities have not said who fired the shots, but court documents paint the former New England Patriot as the triggerman.

Authorities have released surveillance photos of Hernandez with a gun in his hand at his home. Check them out below. 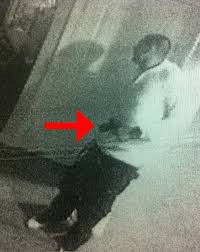 Police said Lloyd was killed with a .45-caliber gun, but it has not been recovered.