Floyd Mayweather is having a little fun at Ronda Rousey’s expense.

After Rousey’s upset loss to Holly Holm at UFC 193 on Saturday, the haters have come by the boat loads to kick the noted trash talker while she’s down. And although Mayweather hasn’t said anything publicly about her fight, he got his buddy to do it for him.

A meme came up on 50 Cent’s Instagram account on Sunday where he poked fun at Rousey. 50 also captioned the photo, “LMAO Floyd told me to post this. He want me to do the dirty work.” 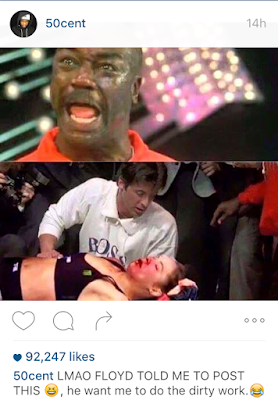 It’s unclear if 50 was joking or not, but he didn’t delete the photo. He even posted another meme. 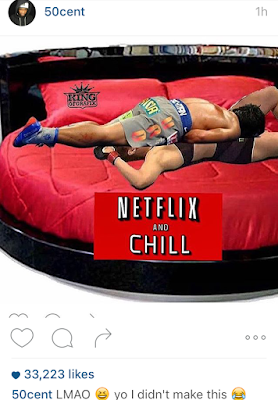 Rousey and Mayweather have been involved in a bitter war of words since 2014. It began when Rousey made a comment about Mayweather and he replied, “I don’t even know who he is,” when asked about the UFC star, per Liam FitzGibbon of Fox Sports.

As a result, plenty had been waiting for Mayweather’s verdict on the fight since Holm knocked out Rousey in Melbourne, Australia.

Rousey, 28, spent the night in the hospital after losing her UFC bantamweight championship to Holm. Check out footage from the fight below.