Flo Rida’s manager got into a verbal argument with one of the Pacers, according to a televised report by TNT’s Craig Sager. The rapper and his manager was seated near the Pacers’ bench for the final game of the Eastern Conference playoffs when the incident occured.

But Flo Rida’s manager wasn’t the only one that was ejected. Heat point guard Norris Cole got into a heated spat with Pacers reservist Jeff Pendergraph. Cole and Pendergraph were both ejected with less than three minutes remaining.

After Flo Rida’s manager threatened to see Pendergraph after the game, he was escorted from the arena by Miami police officers.

“He and Pendergraph had been going back and forth,” After threatening to see Pendergraph after the game, Flo Rida’s manager was politely escorted from the arena by Miami police officers.

“He and Pendergraph had been going back and forth,” Sager said. “He got to be such a distraction that the officials came over and tried to eject him. He wanted to stay put. However, Flo Rida said, ‘You’re my manager, but you’ve got to get out of here now.’” 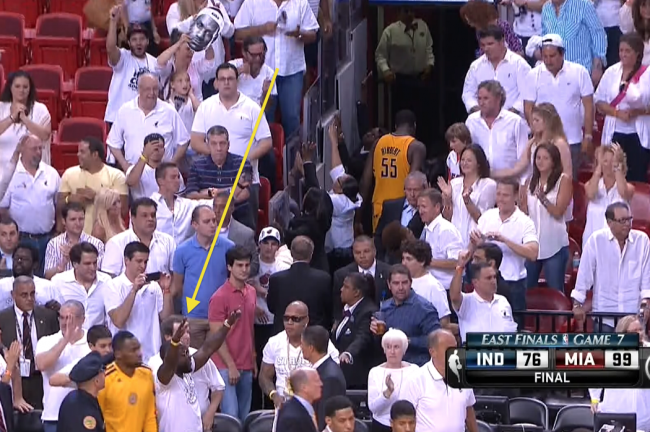 Watch the footage of the incident below.