Rapper Flo Rida won’t be sitting courtside during Game 6 and 7 of the NBA finals at the American Airlines Arena.

Flo Rida’s manager Freezy claims he has been banned from attending. During an appearance on 104.3 The Ticket’s Hochman and Zaslow Show on Tuesday, Freezy said the NBA contacted him and told him that he would be arrested if he tried to attend Game 6.

“They were sending me emails all week and kind threats but I was ignoring them,” Freezy told the show. “Then I got emails and phone calls from their lawyers telling me I’m not allowed in the building for the next two games. So I’m like, ‘What violation did I (commit)’”

Freezy alleges that San Antonio Spurs coach Gregg Popovich asked that he and his entourage not be allowed back because they were getting too rowdy in support of the Miami Heat.

“They were just telling me we had too much energy and the head coach complained about it,” Freezy said. “Them cats want an easy win. They ain’t used to that Miami Heat support right next to them in their ears.” 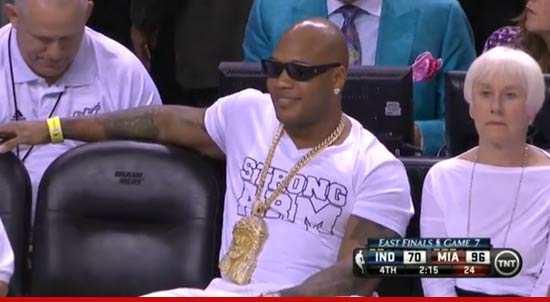 This comes on the heels of Freezy being kicked out of the Eastern Conference Finals game between the Heat and the Indiana Pacers.

“The Spurs are just scared,” Freezy said. “They’re scared of the energy. The Pacers were disrespectful. The Spurs don’t want that building to erupt around them. What I do to cheer for my team is no different than what Spike Lee does in New York or Jack Nicholson does in LA.”