Flaming Lips frontman Wayne Coyne has finally responded to Erykah Badu’s claims that he exploited her and her sister in the explicit The First Time Ever I Saw Your Face video.

After the raunchy video for her collaboration with the rock band Flaming Lips hit the Internet last Friday, Badu lashed out on Twitter against Coyne, complaining the video wasn’t what she had agreed to appear in and it was posted without her approval.

The video premiered on Pitchfork website, but was taken down the next day. The Lips released a statement:

“The video link that was erroneously posted on Pitchfork by the Flaming Lips of the Music Video ‘The First Time I Ever Saw Your Face’, which features Erykah Badu, is unedited and unapproved. Sorry!! We, the Flaming Lips, accept full responsibility for prematurely having Pitchfork post it. It has outraged and upset a segment of fans and we apologize if we offended any viewers!!!”

Badu’s outrage at the video seems to be over a matter of artistic taste, not nudity. The images in question is of her sister, Nayrok, featured fully nude, dripping in gold glitter, red-dyed corn starch and a questionable milky white substance.

After a couple of days of backlash from Badu to Coyne, he let loose in a Twitter rant to address her and whom ever else wanted to read. Coyne tweeted: 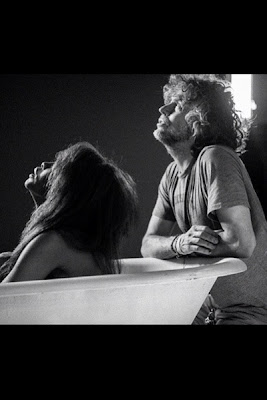