Fantasia Barrino’s baby daddy Antwaun Cook resurfaced in the media this week after it was revealed he is back with his wife.

Radar Online was the first to report that Cook was back with Paula. After the news spread, many questioned why Paula would want Cook back after the public embarrassment he put her through.

Fantasia’s Baby Daddy Antwaun Cook Back With His Wife! [Details]

Cook responded to the naysayers that he didn’t care what people thought about his relationship. He posted on Instagram: 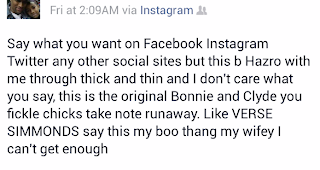 Now it appears that Cook is singling out specific people. Fantasia’s baby daddy didn’t like what comedian Rickey Smiley allegedly said on his radio show and he accused him of being jealous. He also said he was a ‘down low queen’ and threaten to beat him up. Check out Cook’s rant below.

Smiley has not responded to Cook’s comments.