Former American Idol winner Fantasia Barrino is angry that she is being “judged” in a world that has legalized same-sex marriage and marijuana.

While Barrino continues to try to make her tumultuous relationship with Antwuan Cook, who was married when they began dating, work she went on Instagram to voice her frustration. Barrino posted what some perceived to be an anti-gay rant, condemning same-sex marriage and other anti-Biblical issues.

“I Rise ABOVE IT ALL!!! THE WORLD IS GONE MAD,” Barrino wrote Sunday. “KIDS, THE GOVERNMENT THE church House… Everybody Trying!!!!!!! Its a lot that going on that the Bible speaks about we should Not be doing. Weed legal in some places, Gay Marriage Legal BUT YET IM JUDGED!!! I’m not doing Nothing for you… My Life!!!!”

After Barrino received negative comments about her post, the singer deleted it. Her management released the following statement:

Comments made by Ms. Barrino through her Intragram account were recently taken far out of context, and the purpose of this release is to set the record straight. Ms. Barrino is not now, nor has she ever been an opponent of the LGBT community. She has supported and performed at numerous events that are sponsored by the LGBT community. Whether it’s through a live performance or placement on social media, Ms. Barrino uses every opportunity to reach out and connect with her fans, all of her fans. 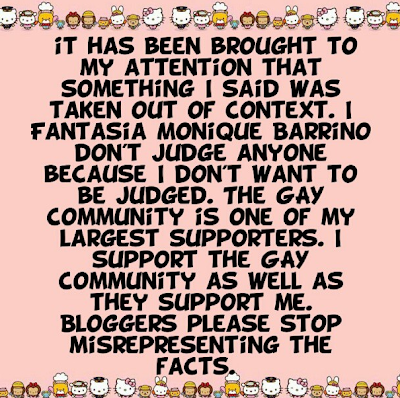 Barrino has been catching a lot of heat since she began dating Cook. The scrutiny was too much to handle in 2010. She tried to commit suicide by overdosing on a bottle of Aspirin.

“I think I was just overloaded with everything, with carrying six years of so much,” Barrino told Good Morning America in August 2010. “I always take a licking and keep on ticking… It just became heavy for me to the point that I just wanted to be away from the noise… There’s so much that people don’t understand. They just see the glitz and the glamour, and they feel like life is so perfect, but we’re human and we go through things.”