Fantasia Barrino Doesn’t Care What You Think About Her Catsuits! [Details]

Fantasia will wear one in a minute, regardless of her fluctuating weight. But there is a large part of her fan base that doesn’t like her fashion choices. Her fan base was up in arms when she wore a sequin catsuit onstage during her American Idol performance last week. Many thought she should have left it in her closet.

Fantasia took the stage in a sequined body suit with two shear slits down the side of her legs.

Some of the viewers thought it was the worst choice of clothing she could have made in her career. And to make matters worse, Chaka Khan also wore a catsuit that night. Many believed Khan blew Fantasia out of the water with her catsuit.

Khan entered the stage with a shawl slightly covering her body, but she quickly dropped it to reveal her slimmer figure. One viewer said, “Chaka Khan served Fantasia & all them kids some serious LIFE with that catsuit, the body is right! fans self.” 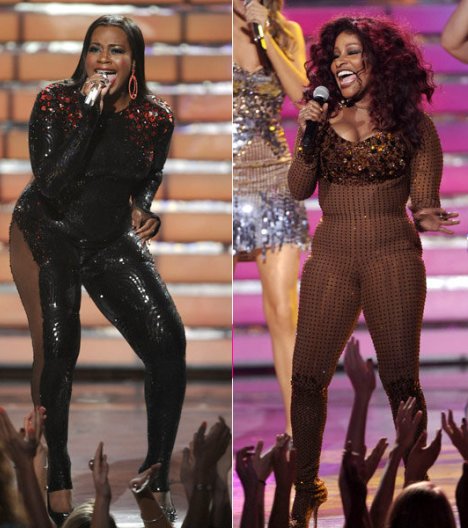 Fantasia admits she was feeling a ‘certain way’ after her performance but wised up to the negativity the next day. She explained on Twitter that she doesn’t care what anybody thinks. Check out her tweets below: