According to TMZ, which received and posted the audio recording, Sterling was upset with his girlfriend V. Stiviano for posting a photo to Instagram of her with Magic Johnson on April 9.

Sterling, who has owned the Clippers since 1981, is heard asking Stiviano why she takes photos with minorities. He goes on to explain how he lives in a culture where there is a divide among races that he follows.

“It bothers me a lot that you want to broadcast that you’re associating with black people,” Sterling is heard saying.

Check out excerpts from the interview:

On his girlfriend posting ‘minorities’ on her Instagram:
Yeah it bothers me a lot that you want to broadcast that you’re associating with black people. I don’t want you to have hate. That’s what people do — they turn things around. I want you to love them — privately. In your whole life, everyday you can be with them. Every single day of your life. But why publicize it on the Instagram and why bring it to my games?

On wanting her to hide her association with black people:
How about your whole life, everyday, you could do whatever you want. You can sleep with them, you can bring them in, you can do whatever you want? The little I ask you is not to promote it on that [Instagram] and not to bring anyone to the games.

On her taking a picture with Magic Johnson:
I think the fact that you admire him — I’ve known him well and he should be admired. And I’m just saying that it’s too bad you can’t admire him privately, and during your entire f—g life, your whole life, admire him, bring him here, feed him, f–k him. I don’t care. You can do anything. But don’t put him on an Instagram for the world to have to see so they have to call me. And don’t bring him to my games. Okay?

After Sterling’s comments went viral, Johnson responded to his comments on Twitter.

Clippers star Deandre Jordan simply posted a blacked out photo on his Instagram.

Meanwhile, Hot 97′s EBRO believes it’s not only on the players to boycott, NBA fans should no longer support the team.

“Attention #blacktwitter — players not showing up for their job is not the answer. They will be systematically made irrelevant over time,” Ebro wrote. “If the TVs are off when the Clippers play, the stands are empty. No one is buying parking, hurts the owner. Players not playing hurts the player.”

@NotBillWalton: Hey @CP3 @blakegriffin32. Money can’t mean everything to you guys. We need you to publicly denounce Donald Sterling. Do Not stay silent.

@SurvivinAmerica: If Dr. King can risk his LIFE to stand up against systematic racial injustice, @CP3, Doc Rivers, Blake Griffin & Clippers can risk a paycheck.

@NelsonEmpowered: @CP3 so are you gonna keep making that money for slavemaster or stand up for blacks? #boycottclippers

@ThePhenom007: The ball is literally in your court @CP3 and the rest of the Clippers. Boycotting today’s game would be the move against your racist boss

@outtherebad: If Blacks ever wanted to show power & soladirity, Now’s the time. #LAClippers players should walk on court and NOT PLAY. @CP3

This is not the first time Sterling has made headlines for his racist comments. A 2009 ESPN article details his history of discrimination lawsuits, racist remarks and treatment of African-American tenants.

ESPN reports, Elgin Baylor, the Clippers GM from 1986 to 2008, filed an age and racial discrimination suit against his [Donald Sterling] alleging, among other things, that Sterling repeatedly expressed a desire to field a team of “poor black boys from the South … playing for a white coach.”

In a related news, Sterling’s wife, Shelly, is suing Stiviano because she feels the young lady had an affair with Donald. Shelly claims that Stiviano targets wealthy men. Here are some of the details of the suit, which was filed Friday, via CBS LA:

According to the suit, Stiviano has several aliases, including Vanessa Perez, Monica Gallegos and Maria Valdez.

Stiviano reportedly met Sterling at the Super Bowl game in February 2010 and that same year began a sexual relationship with him, the suit states.

The suit asks for a return of all cash, land, expensive cars and other items that under California law are the community property of the Sterlings.

The timing of this audio leak is probably not accidental. Sterling’s wife filed the lawsuit on Friday and the recording leaked the next day. Hope the NBA gets to the bottom of this before NAACP LA honors Sterling. 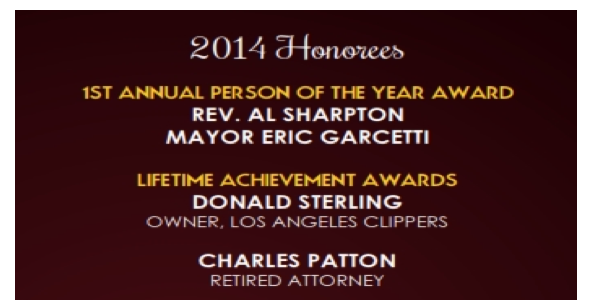 Listen to Sterling’s racist comments below.