Rapper Diamond has made headlines once again for her choice in tattoos.

The Atlanta native has plenty of ink on her body and she doesn’t mind adding more. But many give her a hard time for her choice in body art. Last year, Diamond showed off a tattoo on her face of a bullet.

Diamond seemed to be pretty proud of the ink before her fans blasted her on Twitter for getting such a thing. If you missed that tattoo, check it out below.

Now it appears to be deja vu all over again. She allegedly got a tattoo of the Chanel logo over her entire butt. She posted a photo of the tattoo on Twitter, but after receiving every negative comment in the book she quickly deleted the image.

But not before we were able to get ahold of the photo. Check it out below. 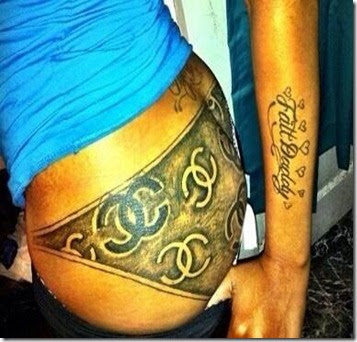 We think this tattoo warrants the No. 2 spot on the all time blunders of rap artists’ tattoos. Gucci Mane still holds the top spot atop of the list. Remember this ratchetness?

Yea, we know its hard to forget. Gucci has a ice cream cone tattooed on his face. Dam shame!
Photos via Twitter, Spin.