Less than a week after Lozada announced she was pregnant, the reality star revealed the unborn child’s father is Los Angeles Dodgers player Carl Crawford. Lozada confirmed the news during an interview with Omg! Insider’s Nina Parker. 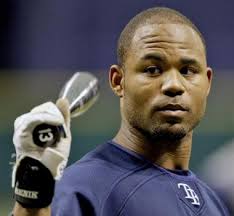 Lozada also reveals that she is in love and is not forcing marriage.

“I definitely would get married again,” said Lozada who is due in March. “I still believe in love…I’m not one of those people that’s like ‘we need to get engaged, we need to get married.’ No, absolutely not. I feel like that’s going to come, just like with the baby, let it come. I’m not forcing anything, so if it happens, it happens.” Lozada was forced to announce she was pregnant after TMZ broke the story. The website got a hold of photos of a very pregnant Lozada and her daughter Shaniece Hairston walking on the beach in Hawaii.

“I am so excited to announce a wonderful blessing — I’m pregnant!,” Lozada told People the day after Thanksgiving. “I’m excited about being a mommy all over again. This is something I’ve been wanting for years and I can’t believe it’s finally happening.”

Lozada, who didn’t reveal the sex of the baby, has been dating Crawford for almost a year. It had been rumored for months that the two were dating after being spotted together in Los Angeles. Lozada ended her two-month marriage to Chad ‘Ochocinco’ Johnson in September 2012 after he allegedly got into a physical altercation with her a month earlier. The Omg! Insider interview is scheduled to air Monday, December 9th.