Lozada was spotted with a darker hair color at the Faithful Central benefit concert with producer and friend Shaunie O’Neal in Los Angeles on Friday night. Lozada reportedly is undergoing an extensive image makeover ahead of season five of  the VH1 reality show.

Lozada, who used to be a blonde, announced her new hair color on Twitter. She tweeted before the event, “Sat in the salon for almost 5 hours! Color, cut, blow dry! Now i’m getting ready to meet my boo @ShaunieONeal.” 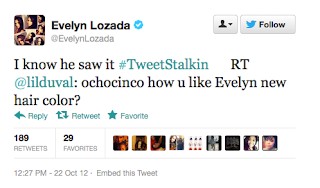 Johnson probably didn’t respond to the tweet because of his plea deal. The former NFL player is not allowed to have contact with Lozada via any medium that includes e-mail, text and Twitter.
Chad Johnson Avoids Jail Time in Battery Case Against Evelyn Lozada [Details]
Johnson was sentenced to a year of probation after a misdemeanor domestic battery charge . He must also complete batterers’ intervention counseling, and pay restitution for medical costs. Johnson head-butted Lozada during a domestic dispute in August, only 41 days after the two exchanged vows.
Photos via VH1