Rapper Eve has been out of the music game for quite some time.

To be exact, its been nearly a decade since her last album Eve-Olution. But Eve will be making a comeback soon with her upcoming album Lip Lock. In an interview with The Women of Hip-Hop, the rapper-actress she talks about her new album and gives her candid opinions about Azealia Banks, Nicki Minaj and Lil Kim.

Check out a few excerpts from her interview below:

“I like Azealia Banks.  I think her style is dope.  If you listen to her lyrics, she knows how to wordplay and I think that’s cute. I’m not really into the Iggy Azalea chick. I can’t really fuck with her music, but her look is crazy. I just can’t believe it.”

“A lot of people want me to hate on Nicki and say crazy things about her. I ain’t got nothing to say about her.  Until somebody names me by name, then I don’t feel like nobody [is talking] about me. I wouldn’t have a problem putting her on a record.

Even going back, Foxy and Kim both came at me and I was like ‘whoah are you’re serious,’ if you want to come see, come see me for real- I’m not that girl. Foxy made a record about me and was talking wild craziness, but to me it makes me feel like- if you’re thinking about me that much- thinking about me everyday- I’m ‘f*ckin up your life.” 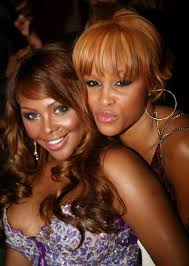 On the Lil’ Kim-Nicki Minaj feud:

“It’s not about publicity. It’s about wanting that respect. I think maybe that’s where Kim is coming from, like, you’re doing your thing right now and no one can take that away from you, Nicki—we all see it—but at the end of the day, if it wasn’t for Kim, she wouldn’t be here and that shit is real.”

On her dream collaboration:

“Lauryn Hill has always been my one dream collaboration. She to me is so dope lyrically.  Unfortunately, she’s just in a place right now mentally, but that would be a dream come true.”

On her new music:

“I’m gonna throw out a viral single at the end of this month before the official single. I’m probably gonna throw out a couple records before the radio single. My whole goal for this record, since it’s been so long, I wanted to make sure that my core audience didn’t feel like Eve completely forgot about us and went to another side. I feel like this record is well rounded. It has enough of the hard street stuff, it has some radio stuff, but it also has some stuff that people can listen to when they’re feeling down.”

Listen to the interview below.