Songwriter The Dream is taking a stance.

The Dream is choosing his friendship with Beyonce and Jay-Z over business. The Dream said he’s not going to work with Cole anymore. The fizzle relations comes on the heels of Cole criticizing Beyonce’s new song, Bow Down.

Cole tweeted after the song was released, “Can’t stand when people all self righteous when it’s convenient it makes them look good. Lmao! But can still talk sh-t when convenient 2 [f-ck outta here]. I done kept it real from the start! #RespectTHAT.”

Cole added,”First Women need to Stick together” now b-tches better Bow. Smh. But it’s all G! Chicks stay shooting the sh-t. But when I speak my mind its a prob. #Well #StayMad”

Once The Dream caught wind of her comments he made up his mind.

“I’ve already done records with Keyshia but right now, because of what  happened, I can’t,” The Dream told Power 105’s The Breakfast Club. “And I think she would respect why I can’t. I’d have a grown up conversation [with her] like, “Yo you’re  talking about my family, like you can’t do that.”

Cole doesn’t appear to be worried. She tweeted:

Meanwhile, Dream did his best to defend his decision on Twitter after many criticized him. Read from the bottom up. 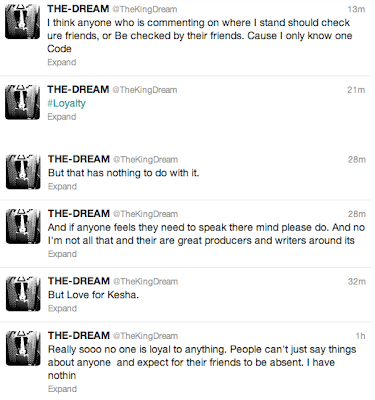