Drake may be a rapper but he keeps up with professional sports.

The Canadian native even hangs with a few prominent athletes–the most notable is Lebron James. Drake has even formed a relationship with former Texas A&M quarterback Johnny Manziel, who will be entering in the 2014 NFL draft.

Drizzy and Manziel’s relationship has evolved so much that he’s given him a shout out in his latest song. On Tuesday, Drake released the five-minute track, Draft Day, produced by Boi-1da and The Fans. It samples Lauryn Hill’s 1998 hit Doo-Wop (That Thing).

While he doesn’t respond to Jay Z’s We Made It diss, Drake does shout out Jennifer Lawrence (“You could really get it”) and Chance the Rapper.

“If I left this shit to chance, I would’ve picked a name like Chance the Rapper / No offense ’cause I don’t know that ni**a,” Drake raps. 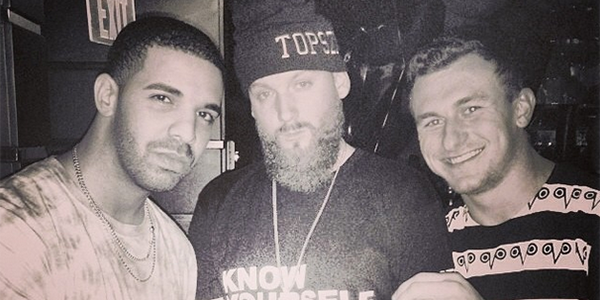 Drake also throws in some subliminals.

“How the game turn into the Drake show? / Dawg, what the fuck happened to so and so? / Where did they go? / Too worried about bitches and fashion, they go missin’ in action,” he raps.

Listen to Drake’s song below.