Actor Djimon Hounsou has finally broken his silence and addressed the rumors surrounding his marriage to Kimora Lee Simmons.

Hounsou wants to put the rumors to rest that author Kola Boof broke up his marriage. He insists that he doesn’t even know her. Djimon told GlobalGrind that he never met her without mentioning Boof’s name.

“It has come to my attention vicious lies and stories are being spread about myself and my family,” Hounsou said. “I do not know, nor have I ever met this person. To that extent any and all claims are totally fabricated and for the press to be spreading these lies is irresponsible on their part. I am a man of integrity and would never betray my wife or my family.”

Kola Boof Says She Broke Up Kimora and Djimon, Sex Tape May be Released! [Details]

Boof was not amused by his comments. She tweeted: 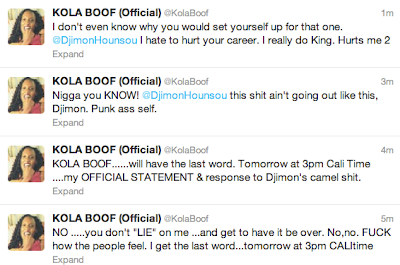 Boof also revealed to her Twitter followers that Djimon and Kimora has sued her. She tweeted:

–“OK….Kimora Lee Simmons just served me with court papers to appear in court. She & Djimon suiing me.”

–“Kimora just stuck me with a lawsuit. Papers served 30 minutes ago.”

–“My lawyer’s coming for brunch to read it. But I already know her case is flimsy. She’s NOT Djimon’s legal wife.”

–“Court papers or not…my Press Release tomorrow is going to FRY. U fucked me more than her last yr. Djimon”

–“You really bout to bust yourself out trying to sue me. @OfficialKimora …you have nothing to stand on. I’ll reveal some STOIC shit.”

–“Kimora hate to tell you this…but in court, you not Djimon’s legal wife. Marie is. @OfficialKimora And I fucked Djimon more than U last yr”

Boof doesn’t seem to be fazed by the allegedly lawsuit. She’s releasing an official statement about the change of events at 3 p.m. Thursday. We have our popcorn ready.