DJ Quik Threatens to Sue YG Over ‘My Ni**a’ [Details]

DJ Quik is fed up with YG.

The Compton rapper aired out all his dirty laundry on social media. In June, Quik said he was “about to sue” a fellow “Compton rapper.” On Sunday, Quik revealed who that was in a series of tweets aimed at YG.

“@stampedemgmt, Y’all had me engineer and record My Ni**a for @YG and did not give me credit,” Quik wrote. “My Lawyer has You His sights. You’ve fucked up.”

Quik continued, “@YG be safe on the block I invented. @stampedemgmt @SnoopDogg aren’t you all the same company? You don’t FUCK with Dj Quik…This will be in the press in the morning assholes…@stampedemgmt @YG y’all not the truth. #thestreetstalk. @YG @Jeezy shoot me my engineering credits for stemming and recording vocals on your platinum song My Hitta or whatever u call it,” he continued. “@Jeezy @stampedemgmt @YG and shoot my Platinum plaque to: Dj Quik. I’ll wait…@DefJamRecords there’s some fugazi on the west with my plaque for “My Hitta.” My wall is missing an Award. #RIAA.”

YG appeared to respond this morning with a screenshot of Quik’s past tweets and the caption “Fuck the police @djquik.” 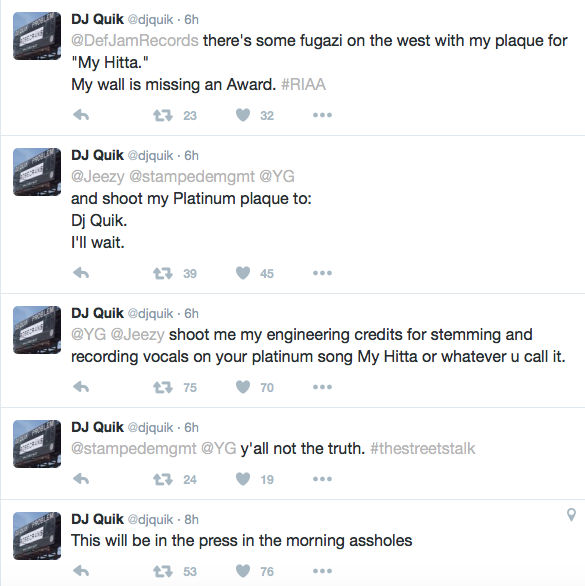 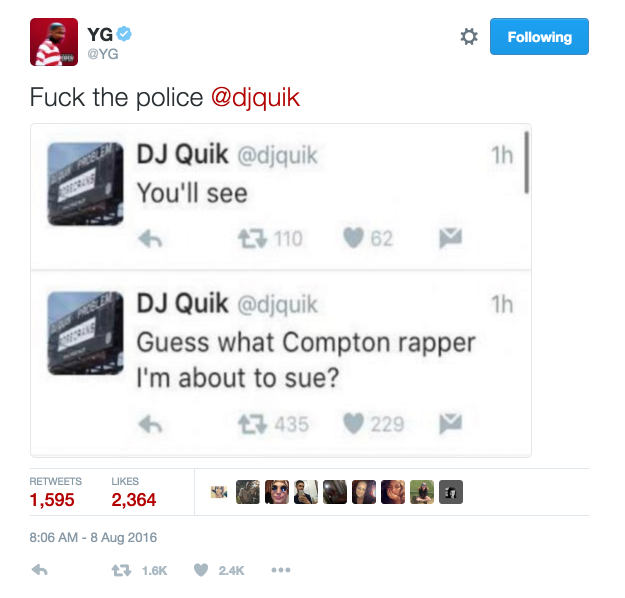 Quik has since deleted his Twitter outburst but he did create a video message captioned with “Run me my money. #UbitchU” while telling whomever it may concern, “Don’t play with grown folks.” “My Ni**a,” with a censored version titled “My Hitta,” was released in 2013. A year later, it appeared on YG’s My Krazy Life.

In 2014, YG and Quik collaborated on “Bicken Back Being Bool (Remix)” off YG’s Blame It On the Streets soundtrack. “Ni**a,” Quik says on the song. “You remind me of my crazy life.”