Former reality star Deelishis had a rude awakening at her home.

Deelishis, whose real name is Chandra London Davis, was assaulted by her estranged husband Orlando Gordon on Feb. 24. Earlier reports claimed Deelishis was assaulted by angry strippers, but the 35-year old denied the report. She said she tripped on icy stairs while wearing expensive designer shoes.

But according to The Detroit News, that wasn’t the case. The newspaper got ahold of federal court records that state Deelishis was injured jumping out of a second story window in Farmington Hills, Michigan after being assaulted by Gordon.

Gordon, who was indicted in January for allegedly drug-trafficking, was free on bond and awaiting trail in federal court at the time of the incident.

Court records and a police report portray a violent incident Sunday at the reality show star’s home on Muer Cove north of 13 Mile, where Deelishis lives with her two daughters.

At 4:20 a.m., Gordon smashed through the front door and struck Deelishis in  the face, according to court records.

Deelishis, who had been sleeping in her daughter’s bedroom, ran to her  bedroom, where her friend was asleep.

The friend? Michael Blackson, a popular stand-up comic known as the African  King of Comedy.

Gordon chased the comic and hit him in the face, according to court  records. 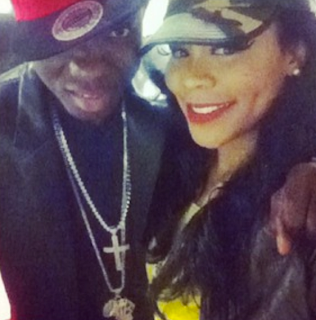 Deelishis, meanwhile, locked the bedroom door. Her estranged fiance tried to  get in, prompting Deelishis to rip open the window screen and jump to the  ground, according to police.

“Davis was in a lot of pain from her right wrist,” police said. “Davis also  had blood on her right hand.”

Gordan is scheduled to stand trial April 9. He is accused of heading a large-scale drug ring with a second man, Wendell Tobias, of Detroit. The FEDs seized more than $1 million in cash, classic cars and more than $130,000 in jewelry, which included Deelishis’ engagement ring and Rolex watch.