TNT reporter Craig Sager won’t be patrolling the sideline in his colorful wardrobes this 2014 NBA postseason.

The longtime reporter is currently undergoing treatment for acute leukemia and will be forced to watch the games from home instead of from the sidelines. So he called in a backup to interview the always challenging San Antonio Spurs coach Gregg Popovich — his son, Craig Sager Jr.

Over the years, Sager’s interviews with Popovich have become must-see television. Sager has become one of the few people on the planet capable of getting Popovich to smile during a basketball game. He’s also given him a hard time. 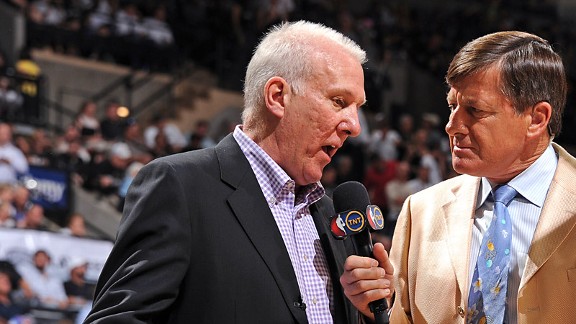 But Popovich only had kind words this time around. After Sager Jr. asked his customary two questions, Popovich saluted Sager Jr. for the interview. He then had a message for the elder Sager.

“You did a great job, but I’d rather have your dad standing here,” Popovich said. “Craig, we miss you and you’ve been an important part to all this for a long time. We want your fanny back on the court and I promise I’ll be nice. Get back here. Good luck.”

Sager Jr. also tweeted that Popovich gave him a hard written note to give to his date. Watch the interview below.