Although Kingston was dating Basketball Wives star Evelyn Lozada’s daughter Shaniece earlier this year, it appears he has moved on. Diaz is definitely single after she was allegedly dumped by comedian Eddie Murphy over the summer.

Kingston and Diaz was spotted having dinner at Italian restaurant Villa Blanca in Beverly Hills. This date comes as a surprise to some because of the two’s former flings. Kingston usually goes for the curvaceous stripper types while Diaz opts for men over the age of 40.

Rumors began to surface that Kingston and Diaz were dating after he posted the photo below on November 22 with the caption: “Karaoke with the beautiful @rocsidiaz.”

Kingston then posted another photo on Saturday with the caption: “One word BEAUTIFUL.” 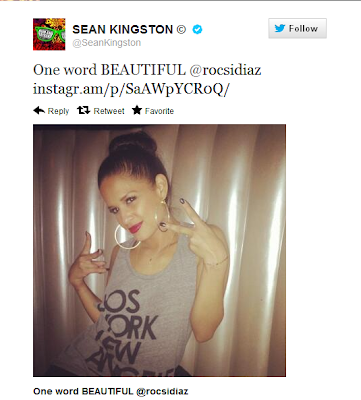 Kingston has also dated stripper and Drake’s former girlfriend, Maliah Michel. Diaz has been linked to actress LisaRaye’s ex-husand Michael Misick, Raphael Saadiq and Terrence J. Check out a few photos from their dinner date below.

Photos via NecoleBitchie and Bossip