The San Francisco 49ers and the Seattle Seahawks are scheduled to play in a much-anticipated showdown on Sunday.

And what better way to sweeten the pot than a friendly wager between opponents. San Francisco’s Colin Kaepernick and Seattle’s Russell Wilson recently starred in a commercial for Madden 25 together where they made a bet that the losing quarterback will have to shave an eyebrow off.

Sure, it was just a commercial, but it appears the wager is real. At the end of the 15-minute clip, a message read, “See who loses an eyebrow after Sunday’s game.” 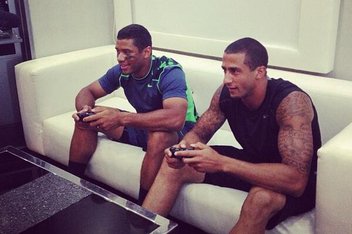 Check out the commercial below.