And it has caused a strain between Cissy and Bobbi Kristina. Krissy is also upset with her grandmother over a book, Remembering Whitney, she wrote. Bobbi Kristina thought Cissy’s book was “disrespectful” because it went into detail about the late singer’s drug abuse, rumors of a gay relationship and turmoil with ex-husband Bobby Brown.

Now Cissy is trying to mend her relationship with Bobbi Kristina. She wrote a open letter and released it to the media in hopes to heal their damaged relationship. 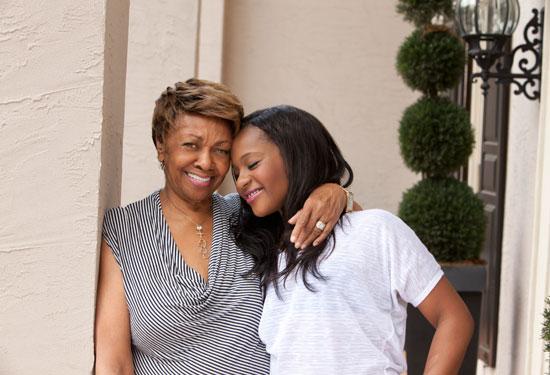 Cissy explains in the letter her love for Whitney. She also reveals she too lost her mother at a young age and sympathizes with her struggle. Read Cissy’s open letter via Hollywood Reporter below.

I love you. My heart is full. I don’t know where to begin.

You may think I don’t understand you and what you’re feeling but remember, Baby, I lost my mom when I was just a child. So, I do know some of the sadness and loneliness of your life since your mom passed away.

Although I know her spirit is with you always, I cry with you and for you. I grieve with you and for you … for all of the days and nights you need to tell her something or ask her advice or just hear her voice … and she’s not there. For all of the times when you need to put your head in her lap or feel her arms around you and she’s not there … For the good and happy times you want to share with her; for the fun and laughter you enjoyed together, but she’s not there … for every day and every night you just miss her … I know.

She was your mom and she was my child and Krissi, I loved her too, more than you might imagine. I know you were upset that I wrote my book, “Remembering Whitney,” but I hope one day you’ll read it and understand that I just wanted to let the world see some of My Nippy—the sweet, friendly, loving little girl with the extraordinary beauty and boundless talent, who grew into the superstar and musical icon the world saw. I want people to know—fans and critics and ordinary people alike—Nippy was a whole person, and like all of us, she was good and bad AND she was my joy!

Krissi, all I want for you is your good health and your happiness. I want you to have a good life that you can be proud of. Do I want you to get married in the near future? No, I  don’t. I think you’re too young and I wish you’d wait. But that’s because I’m Grandma. I’m supposed to worry about you. I’m supposed to wonder If Nick or ANY man is good enough for you, My Baby’s Baby. I’m not angry with Nick and I don’t think, nor did I ever say anything hurtful about him to anyone. I have NEVER publicly commented on your personal life and I don’t intend to. So in the future when you read or hear that Cissy Houston said this or Cissy Houston said that, be confident in the knowledge that it isn’t true.

I try to believe that when your mother passed away the world decided that you belong to them as she did. I’m trying very hard to trust that people who make comments or offer their opinions about you are sincere in their desire for you to be happy. I can only hope they come to realize the best they can offer you is their prayers.

Krissi, as many years as I’ve lived and as many experiences as I’ve had I know I don’t have all of the answers. I do know this, Baby Girl: God’s got you and so do I.

With all my love,

Bobbi Kristina announced her engagement to Gordon earlier this month. No details about their upcoming wedding have been announced.

Photos via TheLifefiles.com and Euroweb