Ciara and Seattle Seahawks quarterback Russell Wilson are expecting their first child together.

After rumors were flowing around Ciara was pregnant, the Body Party singer went on Instagram to announce the big news on her birthday (Oct. 25).

“On this special Birthday I received an abundance of love from friends and family,” wrote CiCi. “And I’m excited to Finally share one of the Greatest Gifts of All that God could give…” 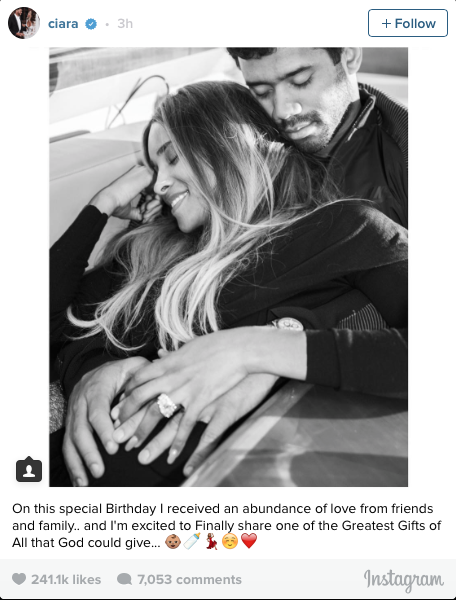 Russell, who married Ciara during a lavish ceremony in Liverpool, England in July, shared the same black-and-white image of the couple embracing with their hands on Ciara’s growing belly with the caption: “The Greatest Blessing of All,” Forever Grateful. #BabyWilsonOnTheWay.”

This will be the 27-year-old quarterback’s first child, while Ciara already has one child. She shares 2-year-old Future Zahir with ex-fiancé, Future. An insider tells E! News that both Russ and Ciara “would like a big family.”

“Ciara’s such a great mom,” Wilson told PEOPLE in July. “She reads to him every night. I read to him too, and we just share so many special moments together. That’s what family is all about…Ultimately, it’s about giving back and loving as much as you can to your fullest. That’s what you’re able to do together.”