Kim Kardashian Admits She Dresses For Kanye West More Than Herself! [Details]

Kim Kardashian wants the world to know she doesn’t dress for herself.

No, the reality star puts on her creative ensembles for her boyfriend Kanye West. Kardashian made the revelation in a recent interview with Us magazine. But her admission didn’t surprise many. West’s influence was revealed during an episode of Keeping Up With The Kardashians.

West, who got officially got together with Kardashian in 2012, spent most of the episode trashing her closet. West gave away most of her clothes for his hand-picked ones. Since then, Kardashian has plummeted off the best dressed list.

“I dress for my man way more than for myself!” Kardashian told Us magazine during a promotional event for Kardashian Kurves, the plus-sized line for Sears she launched with her sisters. “He likes cool, drapey things. Very casual.” 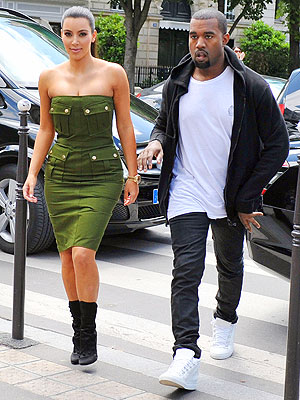 But before Kardashian said she dresses for Kanye, she did reveal he prefers her in: “Nothing! Kim’s sister Khloe said her husband Lamar Odom prefers her in ‘nothing’ as well.

“I like fitted jeans and knee-high boots,” Khloe said. “Kim calls it Basketball Wife. I am married to a basketball  player! Like Kanye, Lamar says he likes me naked too.”

Khloe added, “But then he remembers these Christian Louboutin boots I wore the first time I met him. He made me hold onto them. And whenever I wear them, he’s like, ‘Oh, yeah!’ It takes him back to that night. I’ll never get rid of them because of that!”