And the R&B songstress has received plenty of backlash from it. Michele decided to respond to the critics with an open letter, titled “We Can’t Be Present If We’re Silent.”

“My heart is broken for our country, for the hopes of our children, for the fights of those who came before us,” Michele wrote. “I cry at the thought that Black History, American History might be in vain. This country has had great moments. God has shined His light upon us. Today, I hope that Great Moments begin in peaceful & progressive conversation. I am willing to be a bridge. I don’t mind These Stones, if they allow me to be a voice for the voiceless.”

She continued: “Dr. Martin Luther King Jr. once said, ‘Our lives begin to end, the day we become silent about what matters.’ I am here, representing you, because this is what matters.” 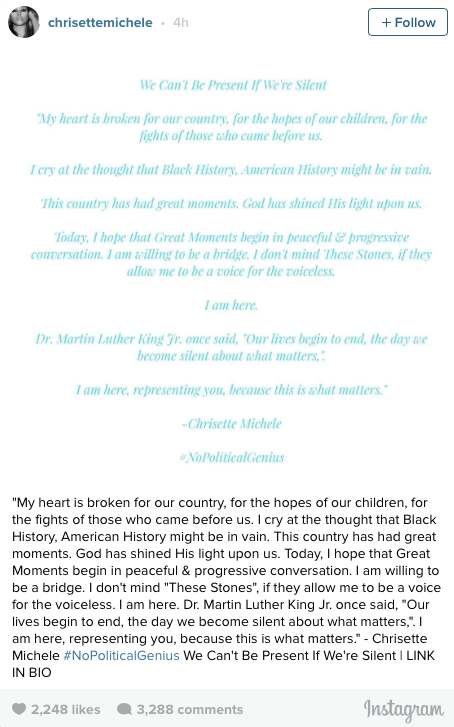 Spike Lee was one of many that was not pleased the Michele is performing.

Lee wrote: “I Wuz Sorry To Read That ‘Sistuh Girl’ Is Singin’ At DT’s Inauguration (And To Use His Fav Word-SAD). I Wuz Thinkin’ ’bout Using Chrisette’s Song- BLACK GIRL MAGIC In My Netflix Series SHE’S GOTTA HAVE IT…. NOT ANYMORE. And Dat’s Da Truth, Ruth.”

The Roots’ Questlove even offered to pay Michele not to perform. Talib Kweli said he would also chip in. “I got 5 on it,” he tweeted.

Some of the other performers scheduled to hit the stage at the inauguration is Toby Keith, Motown crooner Sam Moore, and rock group 3 Doors Down, among others. The inauguration events will take place over the course of three days.

Trump will host the Make America Great Again Welcome Celebration on Thursday. The inaugural swearing-in ceremony, inaugural parade and inaugural balls will take place on Friday. A national prayer service will be held on Saturday. Several anti-Trump protests are also scheduled to take place across the country.