Chris Brown can breathe a sigh of relief.

Brown scored a major victory in his ongoing custody battle with the mother of his daugther, Nia Guzman.

According to TMZ, Guzman had all of her requests regarding custody denied in court. She originally wanted full custody and have Brown monitored during visitations. She also wanted to ban Brown’s mother from seeing the child and to have Brown tested for drugs. The judge denied all of these requests.

Instead the judge extended the joint custody system that is already in place. It allows Brown to have Royalty 12 unmonitored days a month.

When Guzman first filed the documents, the judge asked Brown to front her $20,000 for lawyer fees. But since all of her requests were denied, the judge said she was no longer entitled to the money and the judge gave Brown credit for that amount.

Guzman was looking to earn $16,000 a month, a significant increase from the current monthly total, which stands at $2,500. However, after these court losses, Guzman has dismissed the support petition.

Now Guzman claims that the rulings are old. She responded to TMZ on social media. 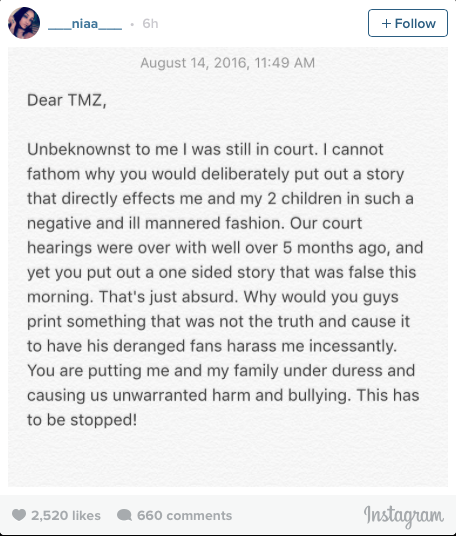 TMZ may have just got wind of the story, but its still true.