Everything is a canvas when it comes to Chris Brown’s artwork.

A few months ago, the Fine China singer spray painted graffiti on the gates of his home. But he was forced to remove it by the Los Angeles city council because it was a distraction to his neighbors. Now Brown has used his $90,000 Porsche Panamera as a form of expression.

Brown spray painted various artwork on his white four-door Porsche. Apparently, he didn’t tell his on-again, off-again girlfriend Karrueche Tran. She appeared to be so shocked that she posted the photo below on Instagram/Twitter with the caption,”this is what the f*** I come home to lmao this n**** man.” 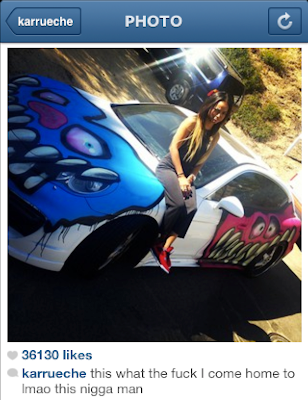 Luckily, Karrueche’s Porshe wasn’t there at the time of his art session. The singer might have put a little graffiti on her porsche too. Meanwhile, the couple were spotted loading up their luggage and making their way to the airport. It appears Brown is accompanying Karrueche to Houston, TX for her club appearance on Friday at the Gatsby.

Brown has been taking it easy lately. He suffered a seizure at the Record Plant recording studio in Hollywood a couple of weeks ago. His doctor claimed it was due to fatigue and emotional stress. But that hasn’t stopped him from venting on Twitter.

Brown explained why he paints monsters on everything while taking a few jabs at some raps, hoes and the DA that sentenced him to 1,000 of community service. Check out his Twitter rant below.

Most of the rap n-ggas make me sick! All political! It’s hip hop. All that gangsta sh-t y’all talk in y’all records… Boof!

Grow some balls and y’all not being fashionable wit y’all grandmother’s curtains on. Any problems… See my “by myself”

I don’t give a f-ck no more. My hands work just fine!

N-gga done 6 months community service wit police and the DA racist a$$ crying to the judge that I didn’t do it. F-ck the SYSTEM!

How about y’all take care of all the homeless kids and families on skid row. Promote helping people that are really f-cked up in your city!

I paint pics of monsters because its a reflection of u b-tchass n-ggas and this b-tchass system!

These n-ggas wanna wife hoes…. A different n-gga every other night hoes. Need to swim up in that kitty wit a light pole.

Try to have a heart to heart wit me but my sh-t ice cold.