Chris Brown, Rihanna Takes Shots at Each Other on Twitter [Details]

Now that Chris Brown and Rihanna are officially over, let the subtweeting begin.

Brown confirmed to The Kyle & Jackie O radio show on Monday that the two were ‘doing their own thing.’ His reason for the split was ‘I can’t really be focused on wifing someone that young. And I’m young too so I can’t focus on that right now.”

Twelve hours later, Brown posted a tweet about love. He didn’t mention Rihanna by name but many speculate he was referring to the Diamonds singer.

Chris Brown Confirms Breakup With Rihanna: ‘I Can’t Be Focused on Wifing Someone That Young’ [Details] 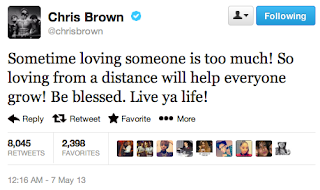 More than a hour later, Rihanna posted her own subliminal tweet. 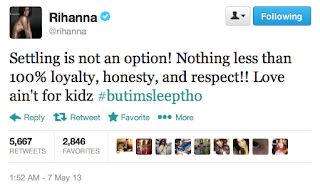