Chris Brown has hired a new security team after getting into an incident with his bodyguard, Big Pat.

Big Pat has been Brown’s bodyguard for quite sometime. He even suffered a nasty head injury during the infamous brawl at Club WIP last year. But according to a Bermuda airport worker, Brown left Big Pat stranded at the airport.

Brown and his former bodyguard got into during a refuel-stop in Bermuda earlier in the week and he was left to find his own way back to the United States.

I’m not sure of the details of what happened on the plane but his plane came in,  got serviced and everything was finishing and they were getting ready to leave.  Then there was a stall. The security  guard got off first. He was standing outside talking to the pilot. Then  Chris Brown and another guy came off. They had to  come inside to Customs. They then went outside to have a cigarette. The security  guard came inside [an airport building] and said he wasn’t getting back on the  plane. [The man told him he had gotten into an altercation with Brown.] Chris  went back through Customs and the plane left at about 2:20pm.

Big Pat didn’t stay stranded in Bermuda for long. He caught the first Jet Blue plane back to JFK airport. Meanwhile, Brown was spotted with his new security team at PINZ Bowling Alley in Studio City. 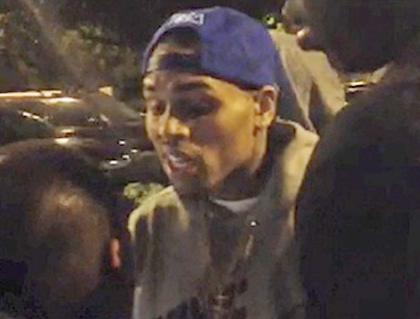 Brown got into an argument with the valet for being charged $10 for parking. Brown claims he was being ripped off because he’s famous. The Please Don’t Judge Me singer said everyone else was charged $5.

Chris Brown says the reason he lost his temper and threatened a valet last night was because the guy tried to fleece him … TMZ has learned.

A source connected to Chris tells TMZ … the valet outside PINZ bowling alley in Studio City, CA — where Chris was attending a charity event — was supposed to charge $5 a pop … but when Chris tried to pick his car up, the valet tried to scam him by charging $10.

The source says other people who parked at PINZ last night were charged $5. Chris believes he was singled out because he’s famous.

Check out the footage below.