Chris Brown has had enough of his baby mama’s antics.

Brown lashed out at his daughter’s mother, Nia Guzman, after she accused him of endangering their child. According to TMZ, Guzman filed court documents accusing Chris of relapsing on drugs and causing their daughter to become asthmatic from second hand cigarette and weed smoke.

Guzman wants to restrict Brown’s visitation and wants him to be forced to take random drug tests. She is also seeking an increase in child support from $2,500 a month to $16k a month.

Brown dismisses the allegations as a money grab in an Instagram post that has since been deleted. Read his rant below. 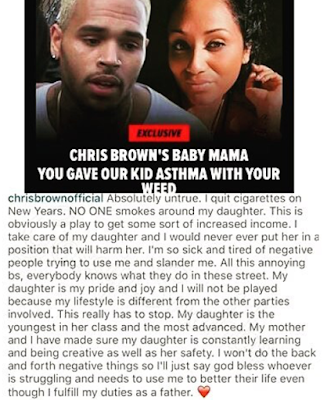