Chris Brown will release a new album in two weeks but he’s giving a sneak peek of some of the artists that will appear on his new project titled, X.

Brown, who performed one of his new songs with Nicki Minaj at the BET Awards on Sunday, released the list of artists on Twitter Thursday night. Many of his fans were surprised to see his ex-girlfriend, Rihanna, as one of the featured artists.

Chris Brown Accident Victim: ‘I Was So Afraid…He Called Me a Bitch!’ [Video] 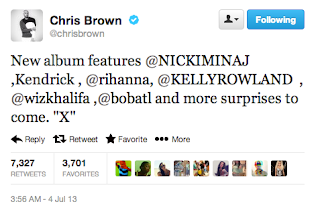 As it turns out Rihanna was too. Brown should have checked with RiRi before he tweeted the list because the Pour It Up singer wasn’t pleased with his decision.

Although RiRi didn’t mention Brown’s name in her post on Instagram Friday morning many assumed she was referring to him. She posted the photo below that reads, “Bitch you will die. Be born again, die again and be born again before I do a song with you bitch.” 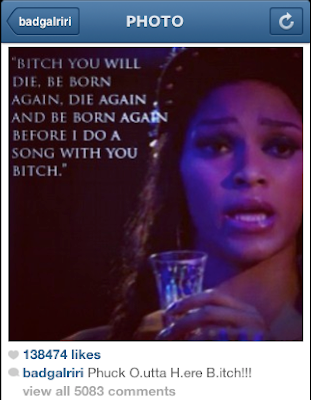 Rihanna made sure she capitalized the letters OHB in the caption, “Phuck O.utta H.ere B.itch,” which is the initials of Brown’s clique the Original Hood Bosses.

Meanwhile, Rihanna and members of her entourage took a break from their Diamonds World tour for a fun day at Tivoli Gardens amusement park in Copenhagen, Denmark. Check out a few photos below.