Chris Brown Accident Victim: ‘I Was So Afraid…He Called Me a Bitch!’ [Video]

The Russian tourist who accused Chris Brown of a hit-and-run revealed in an interview that he looked scary.

Olga Gure-Kovalenko admitted to TMZ that her “blood pressure shot through the roof,” the day her car bumper was tapped by Brown’s Range Rover in May. She claims she didn’t recognize the singer, but was afraid  of him because his tattoos intimidated her.

“I was so afraid because he looked scary for me because it was a big car, he had a lot of tattoos, and I didn’t know he was a celebrity,” Olga told TMZ. “For me he looked kind of scary.”

After Brown and his ex-girlfriend Karrueche Tran took photos of  her car, she tried to take a picture of them and get their information for her insurance company. But she claims Brown went crazy and snatched her phone.

“He was polite at first but when I took a picture and asked him for his  driver’s license and didn’t get it, he start scream at me and he got really  crazy,” Olga said. “He said I have to delete the picture and he tried to grab my phone but  [Karrueche] started screaming at him, ‘Don’t touch her, don’t touch her.’ He  called me a b—h and say basically what I think about myself if I’m in new  Mercedes so I have money and all this kind of stuff.” 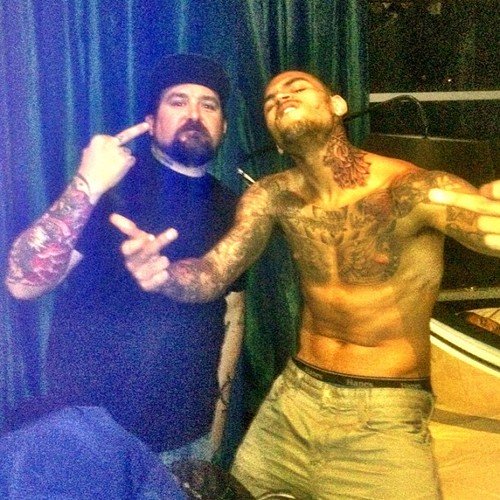 On If She Got All the Necessary Info After the Accident:

“The girl gave me her driver’s license. She wasn’t driving. They gave me some  piece of paper. It was insurance for  Lamborghini…expired insurance. I never got any driver’s license from him. I  didn’t know who he is and I didn’t recognize him.”

On If She Will Sue For Emotional Damages:

No I don’t. I’m not planning to sue him. I didn’t want anything. I just do  what anybody should did when they get in car accident. I just follow procedure  and that’s it. I don’t want anything from him. It’s not my business what’s going  to happen to him.”

Photos via Popstartats.com and TMZ