Former NFL player Chad Johnson is not ready to give up on his marriage.

Although his estranged wife Evelyn Lozada has filed for divorce, Ochocinco hopes to win her back. He even went so far as to get her face tattooed on his leg with the name ‘Eve’ underneath. Johnson debuted his new tattoo during the season finale of HBO’s Hard Knocks and Twitter.

Johnson has been cut from the Dolphins for weeks, but a camera crew decided to check in with him while he was training in the sand. When asked about being cut from the Dolphins, Johnson said,”How did I even get to this point? Somewhere along the way I lost focus. I lost something that I love. I lost two things I love because of my immature actions. I’m going to get both of those things back, one step at a time.” 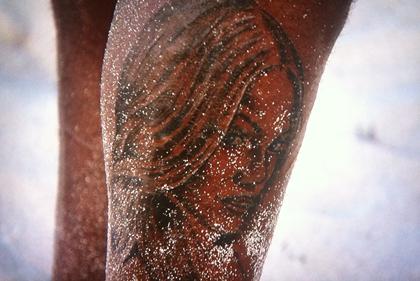 Johnson told his Twitter followers that Evelyn is still his wife regardless of their pending divorce. He posted the photo below along with a few tweets.

Johnson, who got the tattoo over the weekend, has clearly loss his mind. This latest move won’t help his chances of getting back into the NFL.