New York Knicks star Carmelo Anthony and Boston Celtics star Kevin Garnett got into an argument during Monday’s game that resulted with both receiving double-technicals in the fourth quarter.

The jawing between the two superstars was so out of control that Melo tried running after Garnett after the game ended to confront him by the locker room, MSG reports. Before the buzzer, Melo continued to sprew curse words at Garnett.

Garnett, who is known for trash talking players, allegedly told Melo that his wife taste like Honey Nut Cheerios. It sent Melo over the edge. 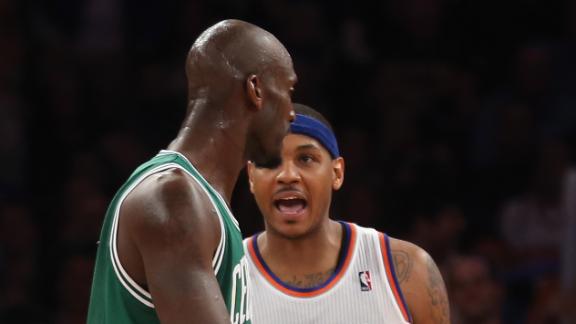 Anthony was seen waiting for Garnett by the Celtics’ team bus after the Knicks lost to Boston 102-96. He tried to wait for Garnett by the locker room. NYPD officers, MSG security, and Knicks coach Mike Woodson were all around to make sure nothing happened.

Celtics coach Doc Rivers hinted the Anthony may have gone to far.

“I’m going to let y’all figure that one out,” Rivers told ESPN Boston’s Chris Forsberg. “I’m going to stay out of that. If it was the playoffs, I’d tell on him, but since it’s not, I’m going to just be quiet.”

Watch video of Anthony waiting at Boston Celtics bus below.

Watch Anthony cuss out Garnett below.